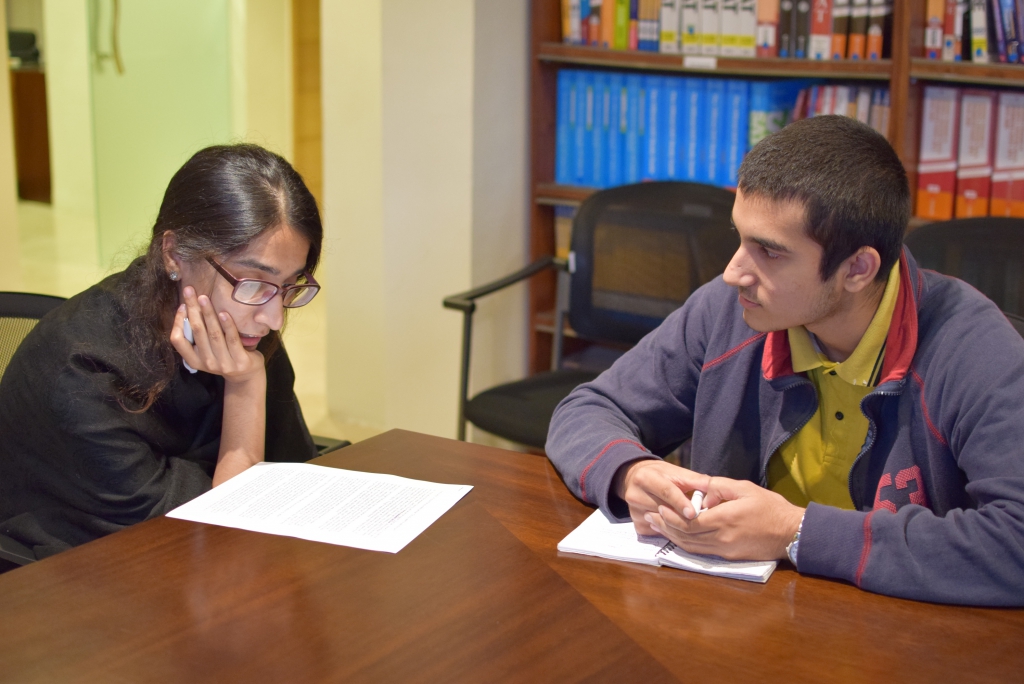 (Pictured) Sameea Najam with an advisee.

I was in the middle of an advising session with a student applying for an early decision, to a private liberal arts school and we were working on his personal statement. Talha is one of the many bright students I work with though he was having a hard time with his essay that day. It described his rise to popularity at school — a desire that he’d harbored for years as one of the quiet ones — and subsequent fall from grace when his friends discovered he was talking about them behind their backs. To fill the void, he wrote and spent his time pursuing healthy activities and more meaningful friendships. The story also came with a moral: “I learned that happiness isn’t attained through chasing and fulfilling desires, but instead it is attained through disregarding them entirely.”

I read those final words of the would-be bildungsroman out loud and fell silent, re-reading parts of it before I gave him my thoughts. And I had quite a few: how mechanical the piece seemed, the fact that the moral didn’t include making amends with those he’d hurt, and that his overall tone seemed angry and self-critical. But more than anything, I wondered about that last line: happiness is […] attained through disregarding them entirely? That didn’t seem to be true, even in the story he was telling. So I asked him about it.

‘I’m wondering about this last line, here.’ I pointed to the incriminating sentence. He nodded.

‘So, you say that happiness comes from disregarding desires entirely, but was that really the case with you?’

Advising sessions like this one often require a little more counseling, trying to figure out what the student is trying to say, whether he or she is communicating it well, and in this case — and my own personal favorite — jumping off of one stray sentence to see if they should be writing about something else entirely.

He shifted in his seat slightly. ‘Well… when I disregarded my desires for popularity, I found happiness.’

‘Right, but you also say that after the falling-out, you decided to reevaluate your priorities.’ He nodded. ‘Which means you didn’t abandon your desires; your desires just changed, right?’

‘So at some point, that changed. Something changed. Am I correct in assuming this?’

He stared at the ceiling for a bit and then answered, ‘Well, it was more like a series of events led me to a moment.’

‘Tell me about that moment.’

So we talked. About how he grew popular, about all the things he did for acceptance, and the consequences they had on him; how he never really felt in his element even when he had a lot of friends, and how his life now felt far more meaningful with just a few. Advising sessions like this one often require a little more counseling, trying to figure out what the student is trying to say, whether he or she is communicating it well, and in this case — and my own personal favorite — jumping off of one stray sentence to see if they should be writing about something else entirely.

Talha was eventually able to elaborate on his thoughts: his happiness came from his hard-won ability to be content with himself that he was able to achieve, he concluded, through distance from his friends and the passage of time.

‘So reflecting on it from afar helped you realize your mistakes. Do you find thinking about things in solitude helps you process things in general?’

He did. And what started off as a story about popularity and acceptance ended in a conversation about his intrapersonal skills and how his contemplative nature helped him find happiness and made him feel like a good fit for the humanities. He took home my reading recommendation (a chapter of ‘7 Kinds of Smart‘) and would return with a rewrite.

Essay feedback can be one of the most challenging parts of the application process. As Advisers, we must always ensure that we guide students in a way that honors their voice and respects their thoughts, while challenging them to think deeper, ask better questions, and draw better connections… all without losing their voice. It’s a difficult job, but as I read the opening to Talha’s redrafted essay, it reminds me it’s a rewarding one too.

Sameea Najam is an EducationUSA Adviser at USEFP Islamabad. Please click here to consult an adviser for applying to the U.S. for higher education.

1. USEFP is very proud to claim you as one of its Fulbright alumni. Can you tell ...