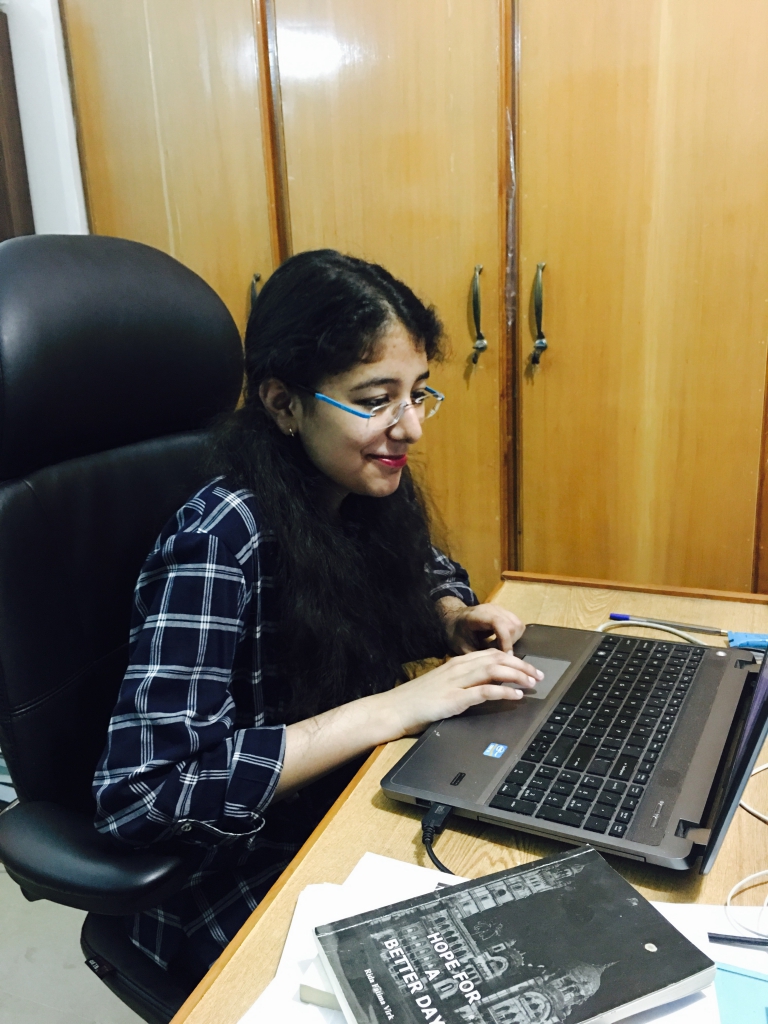 Earlier this year, we ran a creative writing contest for young writers between the ages of 16 and 19. It gave us the opportunity to read through hundreds of excellent submissions received from all across the country. Presented here is the first-prize winner’s story, Rida Fatima Virk is currently studying at Lahore School of Economics.

“Born an angel, an angel you are, and an angel you’ll always be,” Her Mama always cooed as she lulled her to sleep. She loved her Mama the most when she uttered these words; words she sang to herself when her Mama was off somewhere else. She believed in being an ‘angel’, one that would stay the same despite any grim times that may come.

She carefully carved out ‘angel’ over and over while pleading her Mama to say those magical words again, but Mama had long stopped moving and gave off a foul stench. This saddened her. Now she had to go look for a new Mama. “Mama, Mama, Mama,” she sang in a melodious manner as she twirled the pretty, shiny blade in her hand. It was a gift from her Mama so that she would start learning how to cook but she never improved and gave up on learning; though she kept this special gift with her. The problem was she never understood how to properly dice a tomato or cut up a piece of meat right. All she could do was carve, carve, carve, and of course blindly yet elegantly, slice, without any regard for the blood that may spurt and envelope the meat.

She had initially thought they didn’t know what an ‘angel’ was so she taught them by slowly spelling it out using her one and only shiny, special gift yet the only word they knew how to say was, “Stop”.

She had practiced her slicing everyday very diligently to make Mama proud and so Mama always gave her a pat on the head as a reward. But she noticed Mama slowly distancing herself and this made her really sad. Mama had begun saying things like, “What happened to you?!” “You’re not my daughter anymore!” “Stay away from me!” This made her so very sad. She decided she had to make Mama listen so she used her special gift to carve, carve, carve and make her understand but nothing worked.

Years had passed as she searched for more new Mamas. For some odd reason, no Mama was willing to sing to her and this greatly troubled her, especially since she hadn’t slept properly in so long. Why did they all stop moving so quickly? She just wanted to be called an ‘angel’ again. She knew she was one so why did they refuse? Why did they scream so much so to give her a headache? She had initially thought they didn’t know what an ‘angel’ was so she taught them by slowly spelling it out using her one and only shiny, special gift yet the only word they knew how to say was, “Stop”. What a strange word, she had always thought. Why couldn’t they say anything else? Defective. The word floated to her mind. Yes. They were defective Mamas. Maybe if she used the defective Mamas to spell ‘angel’ her true Mama would finally appear once again. Her lips opened wide and stretched upwards from both corners of her mouth. What was she doing? Grinning. Yes. She was grinning because she was happy. After all, she was going to see her Mama soon.

“Mama, Mama, Mama,” she begun singing once again as she dragged, dragged, dragged the defective Mamas to the ‘Main Road’. Some bad people had been chasing her all this time because they were jealous of her. Yes. Jealous of her being an angel. They want her to stop being what Mama told her she was, but why? She wasn’t hurting anyone. Maybe they’ll understand once they see what she did with the defective Mamas. She was carefully placing the white coloured sticks the defective Mamas were hiding inside them, to spell out ‘angel’. The defective Mamas tried to be clever; hiding all these delightful materials. But she was cleverer. Not only could she spell out ‘angel’ but also decorate it using long, soft, ribbons covered in a deep, dark red. In the end, her project was successful and she sat crouched in front of it, grinning.

“Over there! I see her! Stark naked, dark brown hair, looks in her late 20s, 6 feet tall, skeletal figure, a hunchback, and pot bellied. That’s her all right! All forces move in!” boomed the Head of the bad people, “Put your hands up and step away!” he pointed a strange looking object at her. She only turned her head, grinning even more. How could he hurt her with such a small object? All it had were simple curves, a curious hole in the middle and a tiny hook onto which he had his finger placed. Out of nowhere, two more of the bad people had appeared and held her hands behind her back as their Head stopped right in front of her, “Finally done running?” he spat, “Had your fun, eh? Now, identify yourself. Who are you?” he glowered at her with an intent to kill.