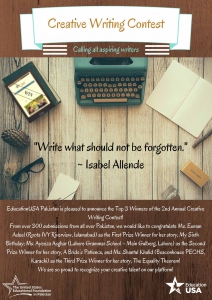 The month of April was all about giving young writers a chance to pen their innermost thoughts, and channel their creativity for an opportunity to win special prizes as part of the 2nd Annual Creative Writing Content organized by EducationUSA at the United States Educational Foundation in Pakistan (USEFP). Our heartiest congratulations to Eeman Adeel (Roots IVY Riverview, Islamabad) Ayeeza Asghar (Lahore Grammar School, Gulberg), Shantul Khalid (Beaconhouse PECHS, Karachi) for placing first, second, and third respectively at this year’s contest. To celebrate the winners and to bring like-minded contestants together, USEFP organized three parallel award ceremonies at its premises in Islamabad, Lahore and Karachi respectively.

This year, USEFP was fortunate to have award-winning author, and Fulbright alumnus, Bilal Tanweer, esteemed poet, printmaker, and designer Ilona Yusuf, and the Director (and writer) at Desi Writers Lounge, Waqas Naeem among our special guests at the award ceremonies – along with numerous Fulbright alumni, emerging Pakistani writers, journalists, and bloggers – to network with and encourage the contestants in their creative journeys ahead. The special guests also took the opportunity to highlight the importance of cultivating a culture of writing, and were encouraged by the quality of submissions received from the teen writers. 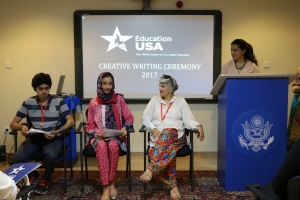 “I was impressed by the range of topics the contestants took on for their stories,” said Waqas Naeem, who also teaches Mass Communication at the National University of Sciences and Technology in Islamabad.

“The writers of the winning entries displayed an ability to embrace the complexity of life and showed the understanding that real-life stories often don’t end in redemption or happiness,” he said.

Poet and artist Ilona Yusuf, while encouraged by the winning writers’ sophisticated use of metaphors and ability to discuss social prejudices, also lamented on the indifference towards creative writing within the country’s varied and complex educational systems.

“Whether children follow a career in writing, academia or otherwise, cultivating these skills encourage them to think out of the box, to give voice to their concerns in a constructive manner; and if they intend to write, they learn to build a narrative, explore emotion, and reason,” she said.

“It makes us more human and, what’s very necessary, makes people debate the how and why of things,” she added.

“The writers of the winning entries displayed an ability to embrace the complexity of life and showed the understanding that real-life stories often don’t end in redemption or happiness.” – Waqas Naeem

With over 300 short story submissions, the writing contest amply showcased Pakistan’s writing talent residing in major urban cities as well as smaller cities, including Gilgit, Mirpur, Abbottabad, Multan, Taunsa Sharif, Hyderabad, Nawabsah, and Rashidabad. Contestants and guests at the awards ceremony also engaged in a discussion on the importance of writing both as a creative endeavor, and as an ‘escape’ from the mundane, and commented on how the ‘power of the word’ allows them immersion into fantastical worlds of their own making.

As one contestant from Karachi, Muhammad Usman Sheikh, expressed, “The event was a literary escape for me; I was lost in the stories of the participants and the guest authors. I feel, I know exactly what I need to write for the next competition.”

EducationUSA’s Annual Creative Writing Contest has witnessed substantial growth since it was first launched in December 2015. This year, the number of submissions from all over Pakistan doubled. Short stories, under 1,500 words in length, reflected themes ranging from teenage romances to war and conflict, and social justice. The top 3 entries hailed from Islamabad, Lahore, and Karachi respectively.

To read last year’s winning submissions, visit here, here, and here! Happy reading! Also, don’t forget to check out this gif of the behind-the-scenes from the contest.