Alumni Alumni In Action In Their Own Words

Fulbrighter Bikes in Indonesia for ‘Women on Wheels’

This edition’s “In Your Own Words,” is by Fulbright and East West Center alumna, Dr. Feriyal Amal Aslam. Her PhD project proposed a soft-power diplomacy approach using aesthetic and performative practices, and people-to-people diplomacy to heal relations between India, Pakistan and Bangladesh. Currently, she is on a one-year sabbatical to focus on her book project based on this research. She recently visited Banda Aceh as part of the “Women of Wheels,” initiative by the Kota Kita Foundation in Indonesia. Below is a brief account of her experience during her visit.

A few months earlier, I was invited as the gender expert on board with Kota Kita, an NGO comprising of city planners working on a number of community based projects including Women on Wheels – to join them on their exploratory visit to the ‘Sharia city’ of Aceh in Indonesia. Women on Wheels promotes cycling for girls and women in Solo and works with communities and institutions from the city to educate and raise awareness about the benefits of this mode of transportation. I was delighted to participate for many reasons. Primarily, my research interest in gender in comparative Muslim societies nurtured during my graduate studies in the U.S., and ongoing questions of norms and customs of South Asian society, which impact women most in the name of religion, peaked my curiosity. Secondly a chance to study Aceh, which is a unique case within Indonesia where, otherwise the gender norms are often different to the more patriarchal ones in Pakistan. Since the Tsumani hit Aceh in 2004 it has been granted broader autonomy and unlike the rest of Indonesia has decided to implement Sharia law. 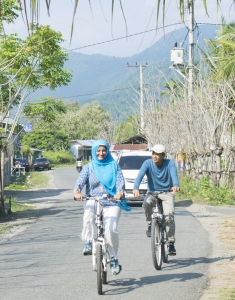 Fulbright and East-West Center alumna, Dr. Feriyal on a bike ride in Aceh as part of the ‘Women on Wheels’ initiative.

Before our trip to Aceh, I read countless news articles about how people breaking Sharia laws – many which target female clothing, e.g. head covering being obligatory and ‘tight jeans’ prohibited – are canned and how ‘Sharia police’ imposes strict discipline for people to follow the rules. So, we, the women in the group, were concerned and packed our ‘Sharia’ clothes accordingly – I kept a ‘jilbab’ (Indonesian name for ‘hijab’) on me. But as we reached Aceh our perceptions of the city changed. We saw that just like in other parts of Indonesia, although women wore the jilbab, it certainly did not prevent them from living their lives, like riding motorcycles! So obviously unlike South Asia, ‘women on wheels’ was not considered taboo here. Women may have been wearing a head scarf but that did not affect their mobility here in Indonesia and not in the ‘Sharia city’ of Aceh either. Instead it was obvious there were greater societal concerns that needed to be addressed including problems of security, limited infrastructure for bicycle riders, and easy accessibility of alternatives like motorbikes and cars.

We went on a 20-kilometer test bicycle ride around parts of the city. To get as close to the local experience of biking I decided to dress local with the jilbab and wore my ‘Khaadi’ pants and a long shirt covering my back, ready to brace all kinds of looks, and maybe even face the possibility of sharia police stopping me for my pants (the definition of ‘tight pants’ was not very clear from our interviews and was very subjective). But I was pleasantly surprised by an overall woman friendly ride; few stares and no hoots compared to my experience of walking the city of Lahore for instance. I even got a chance to ride along a local woman on a bicycle on her way home! 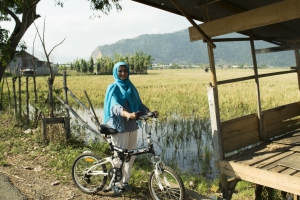 Dr. Aslam parked near a marsh on her bike ride in Aceh with ‘Women on Wheels.’

I couldn’t help comparing Aceh’s recent Sharia case with the Islamization enforced on Pakistani women in the ‘70s and ‘80s. Just like Pakistani women’s movement had an accelerator after crackdown by President Zia-ul-Haq’s martial law on them, it seems the women in Aceh are also not taking these recent patriarchal laws sitting down. On deeper investigation of the sharia implementation with local women activists, biking community and NGO workers, I discovered the tension and resistance between the government and the women of Aceh, particularly between the male and female ‘ulemas’. Quick historical peek into Aceh’s rich history, reveals four female monarchs during its Muslim rule (1641-1699) and a number of female heroes, not to mention the current female mayor. In the local Aceh dialect, there is only one term for male and female religious scholars: ‘tengku,’ and I discovered that they are at war with each other! This is early explorations in Aceh for me but the fact that Indonesia boasts 91.5 percent female literacy may have something to do with this movement of female ulemas gaining momentum.

The more I learn about Muslim women around the world, the more I am committed to education for women’s empowerment. It is Muslim women who must, individually, reflectively understand the message of peace and liberty from within their faiths, and not to have to rely on ‘outside forces,’ often male and patriarchal, to explain their faiths to them.

USEFP is very proud to claim you as one of its Fulbright alumni. Can you tell us ...