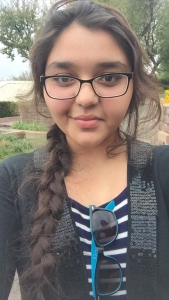 Earlier this year, we ran a Creative Writing contest for young writers between the ages of 16 and 19. It gave us the opportunity to read through hundreds of excellent submissions received from all across the country. Presented here is the submission by Ayeeza Asghar whose story placed second in the contest. Ayeeza attends Lahore Grammar School.

A Bride’s Patience, by Ayeeza Asghar

The cobalt night swallowed Mumbai up as Officer Murad Kalim let the ashes of the cigar drop on the scratched wooden table at the Dhaba. Here, in the subcontinent, the Dhabas closed precisely at 6 pm, after the evening chai but not for the reason you would think. The past years had been a whirlwind of propaganda and political chaos for the people and despite communal differences, the morbid amongst the society had united the two communities like blood brothers. Various investigations had been conducted but no one, not even Viceroy Lord Macmillan, had been able to crack the mystery of ‘Tiger Eye,’ India’s most dreaded serial killer.

“Another one please,” Murad muttered, cigar to one side of his mouth. Receiving a disapproving glance from his partner, Panday, Murad smirked holding up the evidence files from a recent crime scene. Vials imported from Britain glistened in the yellow light of the hut, thick with crimson blood and pieces of what seemed to be locks of raven hair.

“It is always the young, doe eyed ones, right?” Panday sighed, fingers tracing the pages of the desiccated folder the Government had handed the duo apprehensively. Tiger Eye was not a killer to be fooled with; since not even his killing technique had been discovered. However, Murad could sense a pattern, some sort of clues constructing a path over lain with the sudden deaths of twenty five year old female victims with hazel eyes and lustrous, black hair. Perhaps revenge for love unrequited? Murad wondered, placing the bill next to the untouched cup of tea as he gestured Panday to follow him, his enjoyment intruded. Gathering up, his partner followed the detective outside the Dhaba, shivering slightly at the cool gust of wind- a prelude to the much-awaited Monsoons.

“We should inform the agency of this evidence, before they blame us for ‘hampering’ with ‘ state’ property,” Panday suggested, mocking the government for it’s bizarre policies concerning crime scenes. Murad shook his head and instead placed the vials in the pocket of his cashmere coat, courtesy of the British officers. After all, being in the crime game did have its perks. “Inform the Secretary General about our location and take the route directly to Baghwaan Villa. I am heading to Kasoori Village,” Murad instructed walking towards the Rickshaw awaiting him, trying to ignore the protests of his twenty-year-old assistant. Panday was too young for this, and taking him to the supposed hometown of the serial killer was like directing a child towards a busy road.

Wheezing as he ran, the detective climbed into the rickshaw and gave instructions to the appalled driver in a hurry. A pang of guilt pierced his heart, thinking about how poor Panday must be feeling. But then again, the boy did not know everything about this case or why Murad had chosen this macabre file over simpler, less haunting cases, and right now, there was no reason to look back and trace his foot prints because this is where Murad was meant to be and he would not go down without uncovering the mask of this sickened man. The ride was not long enough for him to mull his emotions over as the vehicle stopped amongst a thick canopy of trees above the squatter-settlement village.

Again, there was the breeze of wind, blowing eerily the branches of the trees, the gaps between the trees hinting at glimpses of the velvety night sky. The rich scent of wet earth and perfumed motis hung in the air, heavy and sickening. Somehow there was a sense of foreboding, something just barely there-like the translucent crescent floating in the autumn sky. Running his hands through the pockets of the coat for his gun, Murad made his way to the nearest clearing and walked towards the pond situated behind an array of dissolving residence; the mud walls melting into the ground-abandoned for years after the serial killer broke loose. Almost immediately a shrill scream cut through the silence, jolting the detective from the ominous beauty surrounding him. It was not long before the detective arrived at the edge of the pond, hesitantly looking around for the source of anguish, a hand on his gun.

“Help, please,” a weak voice wavered through the marshes. What lay before the eyes of the detective, in his ten years of experience could never have prepared him for this: a woman lay sprawled amongst the squelching mud, slit ankles twisted at a grotesque angle, ebony hair covering her face. Before he could help her, a sudden glint caught his eye and immediately after made him want to double over and spill the evening’s tea. Through the strands of hair, a half submerged needle under the eye of the victim poked out, almost taunting the detective.

Realization dawned over Murad; of course. A sharp needle in the inner canthus of the eye, damaging the brain. Internal trauma would cause the victim to die instantly…unless; the needle was inserted slowly, causing excruciating pain. The killer had missed this time. He regained his composure and moved towards the woman, crouching down to lift her carefully, as to not further damage her ankles. Breathing erratically, Murad lifted the woman but stopped his movements when he saw her eyes. Hazel.

Suddenly, an agonizing pain seized his ankle, travelling up to his limbs like fire. He fell face forward into the earth, tasting its bitterness as clumps of soil clouded his vision. Struggling through the intense agony he soon came to the conclusion that his legs would never move, just like the victim’s. As if on impulse, visions of his wife’s face flashed before his eyes; the love of his life whose beauty led her to the grave. The possessor of ebony locks and hazel eyes was she and just a few days after their wedding she was found, blue and swollen in a pond nearby Kasoori village, eyes vacant and stained, the same eyes Murad fell for. Soon an image of a woman materialized before the detective’s eyes. Could it be?

Fate proved to do what it does best, hinder and destroy hope, as it was not a visualization of the woman he loved, but India’s most feared serial killer, the un- absolved, the killer who’s hands were stained with the blood of two fifty women was, in fact, a woman herself.

Before shock could register in the detective’s eyes, he was shoved into the pond, head held underneath the murky surface. Long gone was the gun, which lay at the bottom of the pond and Tiger Eye’s soul burned with pride, like a cesspool of misery and vengeance as with an iron grip, she pushed further her second male victim to his well deserved death.

Men. The monosyllabic word was enough to make her retch and tear her own hair out in clumps, as it brought back memories from decades ago-from 1915…

A bride cowered under the muslin veil as she watched her newly wed husband go to the War, like an obedient sepoy should. He vowed he would return, and she took it upon herself to take the veil of patience and chastity instead of the traditional red many her age would. Months passed. Years.

The war was over now and her endurance had not wavered. Not even when the next-door man had wormed her way into her room and tainted the walls with muffled screams of protest and left her hollow. Patience was embedded into her, like the bruises on her arms, the purple hue hardly visible on her velvety skin. A woman such as her was never welcomed anywhere and soon she became ‘the untouchable‘ amongst the scum of the society, a shadow beneath temple stairs, a whisper in the cold night and the breeze before the monsoons.

Her job as a seamstress had never earned much but years of quilting had supplied her with enough money to cross the oceans for her husband into Britain despite being treated as a concubine some Lord who did not bother to name himself before he stained her will, but never her patience. Finally, when she had arrived on the banks of the Thames she had found him in the arms of some vixen with dark hair and deceptive hazel eyes. The same night, an unexplained murder had occurred, startling the English like never before. But to her, it was a quick jab in the tear duct with her quilting needle and it was over. But the era of ‘Tiger Eye’ had just begun.

Now, two decades later, she felt the body of the man beneath her still just like the surface of the water as his corpse floated down into the abyss. Tiger Eye smiled, years of patience had made her anything if not more patient. Killing, she had learned, was nothing but a matter of endurance as she had watched two fifty other vixens suffer as the grains of the sands of time slipped by.