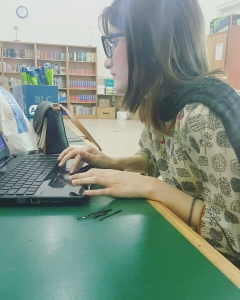 Earlier this year, we ran a Creative Writing contest for young writers between the ages of 16 and 19. It gave us the opportunity to read through hundreds of excellent submissions received from all across the country. Presented here is Shantul Khalid’s submission was awarded third place in the contest. She’s currently a student at Beaconhouse PECHS in Karachi.

The Equality Theorem, by Shantul Khalid

There was more rush and noise this morning than it had been in the last two months, for school had restarted after the summer break in the small town of Faqirabad. Students who had met their friends after two long months exchanged tales of summer adventures. Others still not acquainted with waking up in the morning drowsed on their desks catching a few minutes of sleep before their teachers made appearances.

In the 10th grade classroom, a shouting match greeted anyone who entered the classroom. Gul-e-Rana had already had her first disagreement with the class clown Amir. She was telling him off for moving her things and taking over the window seat.

“You just wait till the teacher comes. I’ll make sure they sort you out”, she said with a huff and took a seat in the first row. Amir merely smirked, happy to have accomplished his first goal of the year. Quick, heavy footsteps were heard outside and all noise from the classroom ceased. They could recognize their Headmaster’s footsteps even in their sleep, for it had haunted many of their nightmares. Tall and white haired Headmaster Zaman, entered the classroom. He looked disapprovingly over Amir’s ruffled hair and Tariq’s rolled up sleeves, before clearing his throat.

“I hope you all had a well rested summer. 10th grade is a very important year of your life. I expect a lot of each of you. Your math teacher this year is Ms. Nagina. She is a highly skilled and competent teacher. I hope you all welcome her and allow her to depart her knowledge on to you”, he said. He looked towards the doorway and visibly took a deep breath as if preparing himself. “Please come in Ms. Nagina and meet your students.”

Ms. Nagina’s arrival was met with a sharp intake of breath. Some of them had their mouths hanging, others with a little more tact, were better composed, only their eyes betraying emotions of shock. The Headmaster quickly turned and left, desperate to get out of the classroom. For a few minutes nothing but silence had engulfed the classroom. It was Shireen, who took the first brave step and spoke.

“I can’t believe it”, she whispered. Her statement prompted other students to voice their thoughts to their classmates too.

“Our teacher is a hijra”, Amir said loudly. Everyone looked at him, finding it hard to believe that he had openly said it.

Ms. Nagina, though wearing a beautiful floral shalwar kurta and with her lips painted a bright pink, had the attire of a women, her physical appearance was clearly that of a male. With a rough chiseled face, clearly shaven clean of any facial hair, and broad shoulders she looked masculine. She looked nervous, and was trying to ignore all that was being said. She picked up the chalk and turned to the board, writing down ‘Quadratic Equations’ in elegant cursive writing.

“Let us begin”, she said with an unsteady smile but eyes shining with zeal.
Before the day was over, news of Ms. Nagina had reached the entire school and before the week was over it had reached the entire town. There was uproar in town that lasted a few days but was quickly taken over by the news of Anwar Malik’s daughter running away with a bus conductor. Besides two parents no one really talked to the Headmaster about the appointment of a controversial teacher, though many openly voiced their disapproval.

However at school, news of Anwar Malik or his daughter’s eloping did not matter. Ms. Nagina was still treated like an outcast, slurs towards her more openly thrown. Besides the Headmaster, other members of the staff refused to fraternize with her. Her smiles to students were met with nervousness or disgust. Some students would utter obscenities if Ms. Nagina’s hand mistakenly brushed theirs, others would utter obscenities for no reason than to spite her. Ms. Nagina however did not seem frazzled by this. They did belittle her and tore her down but no one could deny that she made Math blissful.

Some students really liked her, but her teaching abilities did not contribute to it. Shireen loved to sit with her, not to discuss integration or differentiation, but to talk about the latest fashion trends. Gul-e-Rana respected her, because she did not laugh when she said she would become the President of Pakistan. Hamza was fond of her because she did not call him an idiot if he did not understand lessons like his other teachers did. She took time out to explain to him without making him feel intellectually suprerior to his classmates. Even loud Amir, held her in deep regard. She found his pranks and jokes hilarious and would always in hushed whispers compliment him for it.

It was with happy thoughts about her students and dreams of success of her students that she would walk home every afternoon.

“Ms. Nagina made it very clear Amir, this is my seat and you cannot sit here.”, Gul-e-Rana screamed, her eyes shooting daggers at Amir who had once again claimed her usual position as his territory. Amir leaned forward in his seat and made a show out of clearing his throat.

“You see today is party day. Ms. Nagina said that we would not be following any rules and she would bring us food as a little treat. So by that equation, no rules, no seating chart.”, he said with a smug smile on his face. Gul-e-Rana was about to argue further when someone said that Sir Ali Noor was coming in. Confused and disappointed everyone took their seat as Sir Ali Noor, the much disliked and very strict P.E teacher entered. Bulky and bald, he entered the room and sat in the teacher’s chair.

“Your teacher is absent today so I’ve been asked to take over. Do not make any noise or there will be consequences”, he said his voice full of menace. The class was disappointed. They could make do with Abominable Ali, but Ms. Nagina missing their little class party, it was a punch to the gut. In silent whispers and sketchy hand gestures, they tried to discuss Ms. Nagina’s absence. It was unlikely of her to ever miss class.

The door to the class creaked open and Shireen entered, her nose red and face streaked with tears. Sir Ali glanced over her once and gestured for her to take a seat. Curiosity conquered fear and when Shireen sat down, the class surrounded her, wanting to know what was bothering her. Shireen tried to compose herself but her attempts were futile. Hiccoughing and crying she then spoke.

“Its okay, Shireen. You can tell us”, Amir said smiling at her. He enjoyed making people laugh and seeing bubbly Shireen crying unnerved him. Shireen shook her head and covered her face with her hands. She took a minute to compose herself before responding.

“Ms. Nagina isn’t coming back. Oh, she’s never coming back”, Shireen said, her voice in pain. Everyone around her froze. For a minute the world came crashing down, but everything was alright. The birds were still chirping outside and students could be heard downstairs. Everything was alright and nothing was okay. “Yesterday while returning home, Ms. Nagina was attacked by some men. They assaulted and hurt her. Her community took her away.”, Shireen ended with a sob.

“Finally did what was right. Should applaud the men for taking care of scum like that” Sir Ali’s gruff voice cut through from the front. Everyone looked up at him, as he casually leaned back in a chair.

Gasps were heard all around turned as Gul-e-Rana, the modal perfect student, said this standing looking like a lioness ready to pounce. No one had ever seen her livid.

“She is a better person than you could ever be. The world hurt her so much, yet she was kind and brave.” , Hamza said from behind Shireen.

“We feel sorry for you. Sorry that you’ve let hate consume you”, Shireen continued. Sir Ali looked at everyone, mad and angry; he made a step towards them, but seeing 12 children standing steadfast, not the least tethered by him, he turned on his heel and left, banging the door behind him.

For what was left of the period, the students sat down and talked about Ms. Nagina and her Math classes. Society was cruel and if you were different, you were shamed. Being human is supposed to be the only thing that matters. Before the Urdu teacher entered for her lesson, everyone made a promise to stand up for those, that could not protect themselves, because they would be having their party if someone had stood up for Ms. Nagina.