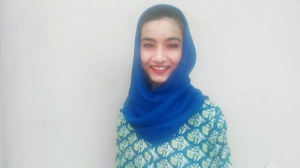 Earlier this year, we ran a Creative Writing contest for young writers between the ages of 16 and 19. It gave us the opportunity to read through hundreds of excellent submissions received from all across the country. Presented here is the winning story by Eeman Adell who’s currently studying at Roots IVY Riverview in Islamabad.

My Sixth Birthday, by Eeman Adeel

Gzz gzz gzz. The cold electric razor touches my ear, eliciting a sideways jerk. Chocolate strands with a tinge of golden fall swiftly on the floor. I’m instructed to keep my head straight yet again. I have wanted to look similar to Apa for a while now. Today’s my sixth birthday, hence the spontaneous haircut in the midst of the time-pressed week. In Khairi Murrat, girls are made to shave their heads as per tradition. “To fit into society better”, “to earn more for their families”, “to be widely accepted by other people” were a few responses by village elders to the oft-asked question “Why?” Quicker than I had envisaged, the barber finally sets me free from the neck-throttling, breath-clasping, constantly-itching blue nylon fabric. A reflexive gasp leaves my mouth as I stare at myself in the cracked dirty mirror. I don’t know what is more surprising; the fact that I don’t look remotely close to Apa, or the fact that my luscious locks are gone, presumably for eternity. I recall Apa cautioning about the uneasy sensation that will kick in as I set eyes upon a new me. Disregarding the momentary thought, I tug out the fifty rupee note, hand it to the patient barber, thank him, and meander back home.

Stepping on the irregularities embedded in the gravel road on the short-lived voyage, I try to imagine what Apa would say about my new hair. This is the first of, hopefully, many expeditions anywhere out of the main door without Apa’s eagle-eyed watch. Imagery of the innumerable kidnapping stories Ma told me keep popping up in my brain. No more ambling, I pick up my pace. As I reach the premises of the land I can call my own, I breathe a sigh of relief. I trudge to the wooden front door, it needs fixing. The lock doesn’t do its assignment and the bolt merely screeches. Upon thrusting the door open, the snug ambiance greets me along with the warming smell of carrot pudding. Ma is cooking supper on the far right corner. For once, a change in my appearance didn’t require a piercing squeal for everyone to commend. Ma says I look like an angel. Baba is too busy shuffling packets of seeds to respond beyond a brief glance. Fatima hugs my legs tightly, her head reaching my knees, her heels in the air. Apa passes a beautiful smile, through which I can clearly see remorse and sympathy, virtually spelled out.

Apa is eleven. She tells me I’m too young to comprehend the happenings of life, that I’ll realize my ambition to live like her would surpass one day. I’m not sure about her first remark, but I definitely disagree with her second. Every night Apa tucks me in a blanket laid on the carpeted floor, next to her own, and we chatter our way to sleep. She tells me about her childhood, how it molded her, how it ruined her. She was six when Baba stepped on her side of the carpet and enforced her to change out of her “hideous pink rice paper-like garments” into something more “acceptable and blue”. Apa still despises the word “acceptable”. Everyone uses it as a criterion for the norm, it’s uglier than it sounds, Apa says. Ba yanked her bamboo doll out of her fragile salmon hands, and dragged her to the barber shop. Forced to get rid of her alluring auburn hair, her expedition to the barber was far more traumatizing and crestfallen than mine. Apa distinctly remembers the stinging on the top of her nose from excessive sniffling, her blameless welled up eyes pulsating to the extent where they could effortlessly fall out. Sporadic spanks by Baba failed to quieten her, leading her to spend the rest of the day in isolation, without any food, the scorching heat left to nudge her. Albeit she was officially a member of the family, she was disheartened with life there on. I am still unable to comprehend that. Being able to go out as Sikandar Mian’s eldest ‘son’ was a huge honor; after all, Baba was the best farmer in the village. But Apa never saw that as a benefit for herself. Conceivably because she was never allowed to wear pink anymore, or grow out her hair like the city girls, or play with dolls, tea sets and ribbons. Her sixth birthday was the most appalling, according to her. As she reminisces tragic events, they sometimes influence my cognition, but Baba reminds me Apa is “a rhinestone in an emerald village”, so I crowd her theories under Ba’s insular assertions in my brain.

“Wounds heal indeed, scars don’t. They linger on, reminding you of their horrendous attachments.” Apa was quick-witted. Due to her past, I surmise.

Apa’s account of her first day at work is a slightly empathizing one. The punishment, in retaliation to her persistent cries over her haircut, was the pioneer that brought forth a grueling and repentant life for poor Apa. 5 am, every day of the strenuous week, Apa was awoken by Ba’s thunderous voice. Ordered to wear ill fitted rags and skip breakfast due to “wasting precious daylight”, Apa clomped, with feet weighing a ton each, to the dreadful farm. 18 hours of ceaseless labor at the cultivatory terrain, 4 hours of wide-eyed sleep and a scant 2 hours of “freedom” was the repercussion to the continuous weeping incident. At the posterior part of her head, she knows that day was imminent, but the involuntary bawling reaction ends up being blamed- a way of self-consolation perhaps. Nevertheless, her limbs, inescapable from relentless torment, have grown accustomed to the arduous routine.

Each of Apa’s tales encompass my thinking as I slurp on the carrot pudding. I’m six today. I am prepared to become “Sikandar Mian’s son”. I’ve waited for a noticeable amount of time now. As Apa’s “horrific” narrations elbow me, I envision greater liberty, free will, independent adventures to the Crisps Khoka. I daydream about hurdling to the market without Apa’s presence, requesting the shopkeeper for an orange ice-lolly myself. How truly wonderful would that be. I formally begin work tomorrow. Ba says I’ve been good, not like Apa was when she was in my position, and deserve to begin the next day. Part of me is ready for this much anticipated moment, correspondingly, the other half is rather timid of the forthcoming situation. I can feel the last bite of carrot pudding glide down my esophagus and plop into my stomach, like a child on a slide landing in a ball pit. Exhausted at the contradicting thoughts, I express weary goodnights and stride towards my bed. A kiss on my forehead by Ma, a pat on my shoulder by Ba, a dejected wave by Apa, incomprehensible mumbles by Fatima. I’m internally alleviated. Gravity pulls my body towards the bronze blanket and my eyes seal faster than my mind could discern the intensity of fatigue that enclosed me.
The rhythmic prayers by cockerels awaken me. I don’t recall when exactly I fell asleep last night. The sun rays glisten through the cracks in the front door, energizing me in a queer way, lifting me out of the cozy sheets like the dead reborn.

“Morning, my son.” Ba greets me good morning for the very first time in all six years. It’s also the first time he’s calling me his son. I’m rejuvenated.

“Today’s the day you start helping out, lightening our burdens another 25%.”

“Jee Baba. Apa will assist me, right?” I ask a question I knew the answer to. Baba blinks heavily in accordance.

Familiar yet extravagant aromas tickle my nostril hairs. I make my way to the kitchen. Apa has made scrambled eggs with freshly picked tomatoes, topped with a big blob of homemade cream; the breakfast I usually have on special occasions like Eid.

“I’ve made this for you my dear sister. I hope a hearty meal to commence your new lifestyle can suffice to keep your smile stretched widely forever and ever.” I clutch Apa and devour the delectable feast.
I have a vague recollection of what occurred thereafter. I remember the veins in my wrist thumping violently as Baba’s brawny hand escorted me to the farm that I had visualized myself sowing seeds and plowing crops in. I turn eight next week. My memory solely comprises of encyclopedic knowledge about angiosperms, their germination periods and methods to maximize Ba’s profits. Flashbacks of Apa’s story telling sessions, and the morals attached, float about my brain as I reap yet another batch of golden potatoes, blistered hands, sunburnt skin, bruised arms, scratched shins. I regret yearning to live like a boy, I regret longing for moist dirt stuck under my fingernails, I regret not listening to Apa. I wish I could inform her of her accurate prediction, but I haven’t heard from her in over a year since she was dispatched into the hands of our second cousin, Usman.