Global UGRAD alumni are known to embody the values of acceptance, inclusivity, philanthropy, and civic responsibility. They are chosen for their potential to become community leaders, and to influence change.

Narrated below are the contributions some of these inspiring alumni have made as result of their exchange experiences at a U.S. university:

Improving access for women: While at Murray State University, Syed Haris Hashmi volunteered at the campus Women’s Center where he developed a keen sensitivity towards women’s issues, especially the lack of access to viable economic opportunities. On his return to Pakistan, Hashmi channeled this awareness and his newly acquired project management skills into a fledgling startup called Pink Taxi. Pink Taxi is a women-to-women taxi service, that supports women in need of financial assistance, by training them to be professional drivers.

Employing art for activism: Spring 2011 alumnus, Hassan Mujtaba Zaidi, has been selected as one of three youth awardees to represent Pakistan at the 2018 Queen’s Young Leaders Award hosted at Buckingham Palace in June 2018. Zaidi is a founding member of the regional wing of the organization, “Art for Change,” which has hosted an International Child Art Competition and Exhibition for the past three years, supporting underserved children across Pakistan.

Community service for the disenfranchised:

Humza Ahmed Abbasi, along with three other students, started a unique initiative, by the name of Urban Plunge, while studying at Saint Martin’s University in Lacey, Washington. Urban Plunge aims to combat homelessness through empathy; participants of the program, live the life of a homeless person for 24 hours, experiencing the problems they face. Humza is now working to expand the operations of the organization bringing on board contributors who can help alleviate some of the sufferings of the homeless. “Interacting with local homeless families and individuals helped me to empathize with them and made it a goal [of mine] while I’m here in the United States to serve those in need as much as I possibly can.”

Areesha Khan has been actively working towards strengthening her host campus community, at California State University – Monterey Bay. She contributed 30 hours of service to organize the university’s international student orientation and update the registration process for international students making it more efficient.  Her efforts have resulted in the university creating a new role in the office for a student volunteer assistant.

Mah Gul Wahid’s work for Feeding America, to support hunger relief for the underserved in her community has won her the appreciation of her peers. Studying at Fox Valley Technical College in Appleton, Wisconsin, she sorts and tracks food donations for distribution to 4,000 families in the area. 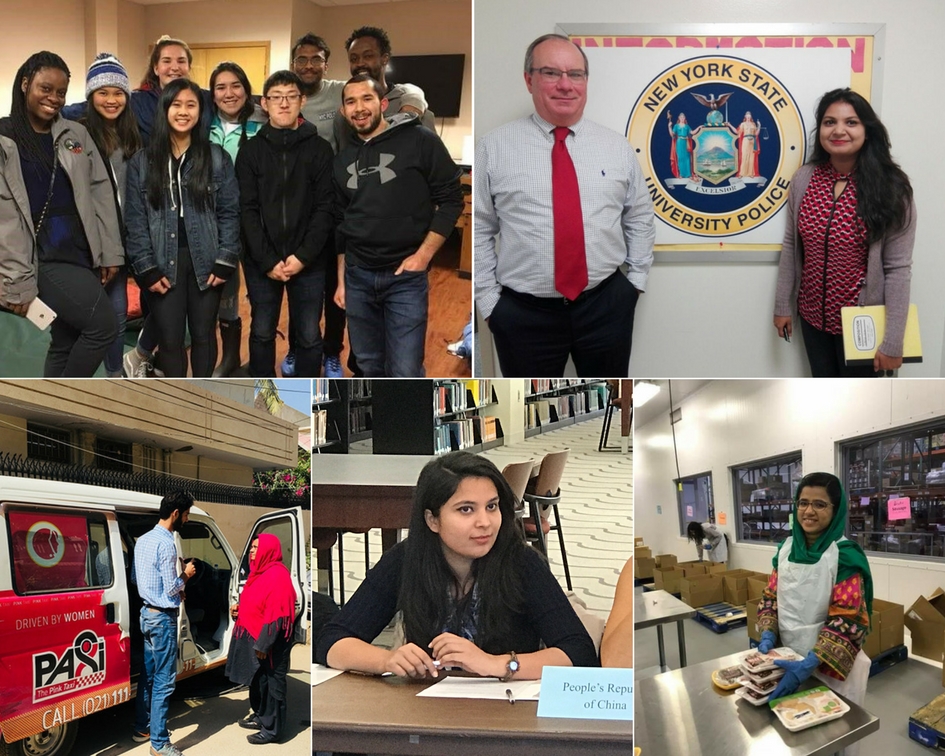 Muhammad Aon at Boise State University in Boise, Idaho, is strengthening the administration of social services at the Interfaith Sanctuary House, a local shelter for at-risk individuals, such as disenfranchised youth and homeless veterans. Muhammad cooks and serves meals to the residents, manages operations at the front desk, and handles the laundry. The volunteer coordinator at Interfaith Sanctuary House describes Muhammad as a hard-worker who “has truly been an asset at the shelter. He is more than willing to do the less glamorous tasks and has brought a lot of joy to the residents.”

Ujala Bashir at Montana State University – Bozeman is volunteering as a hotline dispatcher with HAVEN, an organization that provides intervention and support for victims of domestic abuse. After joining 40 other volunteers for an intensive eight-hour training in providing assistance to domestic abuse survivors, Ujala was one of eight trainees promoted to the hotline dispatcher role. Commended for her empathetic yet supportive tone during mock training calls, Ujala will now field anywhere from 40-60 hotline calls during her scheduled shifts. “Her contribution is a much-needed addition to the community,” states her host advisor.

Encouraging dialogue and diplomacy: Sobia Siraj at the University of Evansville was one of two students selected to represent the university at the annual Indiana Consortium for International Programs Model United Nations Conference. The two-day conference brought together representatives from five different universities to debate the crisis in North Korea and in Syria. Sobia and her partner were awarded “Best Delegation” at the conference.

Promoting leadership and community engagement: Sarah Dean, worked with the Chief of SUNY Plattsburgh Police Force to design a plan for international students to play an active role in not only strengthening the SUNY Plattsburgh University campus community but also ensuring that the campus is a safe and inclusive space, free from bullying and hazing.

Contributing to the cultural landscape

Husinah Amir, Hadia Zafar, and Ayesha Tariq were recently featured in Delta State University’s campus newspaper. The article describes how each of the three students has benefitted and learned a great deal about American academic, cultural, and social life while in Mississippi.

As part of the 2019 cycle, USEFP is currently holding interviews for over 480 shortlisted UGRAD applicants in Islamabad and Karachi. If you believe that you can benefit from a semester in the U.S. and apply the skills you learn in your own community, please visit our website for more information.