“Armed with Faith” Screened Exclusively for Alumni in Lahore and Peshawar

In the summer, USEFP hosted an exclusive screening of Armed with Faith, a Sharmeen Obaid Chinoy production, which highlights the dangerous and courageous work of the Khyber Pakhtunkhwa Bomb Disposal Unit (KPK BDU). The film is co-produced by Fulbright alumna, Haya Fatima Iqbal, who also co-produced the Oscar winning documentary, A Girl in the River – the Price of Forgiveness, and directed Fulbright Heroes, season one and two.

The documentary film is a poignant account of the day to day challenges of working in the Bomb Disposal Unit in an area fraught with perils. The film follows the lives of two bomb technicians and their commander, who risk their lives responding to bomb defusal calls, armed often, as the title says, only with faith. 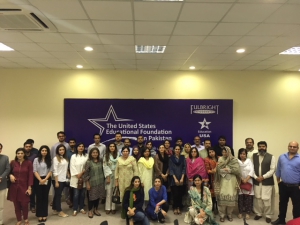 Alumni in Lahore enjoy the screening of “Armed with Faith”.

The film was screened for alumni, and their family and friends, in Lahore and Peshawar. It was a sobering experience for many of the audience members, as they were presented with a vivid and jarring picture of what life must be like for these brave, selfless men who, with the most meager of resources, put their lives on the line for the greater good. Among the many bomb threats and blasts the film covered, there was the BDU’s response to the 2014 Peshawar School Massacre, a national tragedy that will be forever etched in our minds.

While most of the film was centered around the struggles of working in a high-risk, under-funded unit, some scenes also drew focus to the family lives of the three men it featured. Seemingly idyllic moments shared on the dinner table and in backyards with their wives and children, bore a grimmer undertone of the threats they face every day. 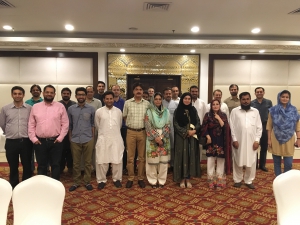 Alumni in Peshawar enjoy the screening of “Armed with Faith”.

The screening was followed by a short talk with the director of the film, Mr. Asad Faruqi, who discussed the artistic process of making the film, the evolution of the idea over a span of many years, and answered audience questions.

Fulbright and Humphrey alumni, who want access to academic grants opportunities, a nationwide contact directory, employment opportunities, and invitations to exclusive national and regional conferences, workshops, and activities, can sign up for Alumni Portal here.