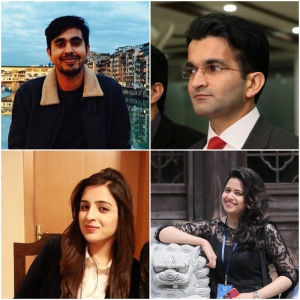 USEFP is happy to announce the addition of four new staff members to its team. Here’s a brief introduction of our new team members:

Hassan Nisar graduated from Sarah Lawrence College in May 2017, where he studied liberal arts with a concentration in Art History. He went on to work for the South Asian Art Department at Bonhams in New York before joining USEFP in August 2018. He enjoys traveling and visiting different museums all over the world.

Kamran Ali Changezi joined USEFP Islamabad as an EducationUSA adviser in April 2018. Prior to joining USEFP, he worked as a consultant analyst in the United States, mostly in the healthcare insurance industry. Kamran obtained a BS in Finance from MinneSNOWta and then an MBA from University in Delaware. His area of strength is graduate advising. Kamran believes in the equality of educational opportunity and considers higher education institutions as power houses of a nation. Outside of work, Kamran enjoys traveling and is a nature enthusiast.

Maryam Zahra Khan returned to Pakistan this year with an MBA, MS Project Management, a Graduate Certificate in Marketing and a Graduate Certificate in Project Management from Missouri State University, Springfield, MO. She has a work experience of more than four and a half years and is a trained professional in the field of Marketing, Strategy and Advertising. Her portfolio includes marketing campaigns for brands like Pepsi, Samsung and Nestle. Maryam feels strongly for education, and during her stay in the United States she realized that was her career choice right after graduation. She enjoys socializing and traveling.

Sarah Atiq joined USEFP in June 2018 as Communication Officer at Pakistan – U.S. Alumni Network. Earlier, she worked as a broadcast journalist for Dawn News. Sarah was part of the U.S. State Department Professional Fellow Program cohort 2017. She has done her M.Phil. in Peace and Conflict Studies from National Defence University.