Each year during the Global UGRAD predeparture orientation, USEFP is introduced to a vibrant and dynamic group of future leaders, eager to begin their journey of learning and exploration in the United States. These undergraduate students are chosen because of their leadership potential, acceptance of diversity and passion for change. Through training and experience in the U.S. they are able to build on these qualities, priming them to implement long-term civic and economic changes in their local communities in Pakistan.

Perhaps the most significant role of Global UGRAD grantees is to serve as cultural ambassadors of Pakistan in the U.S. and vice versa. They are encouraged to engage with people from diverse cultural and ethnic backgrounds and learn the importance of cross-cultural understanding. Demonstrating this spirit, Global UGRAD grantees, Muhammad Faisal, Irfana Babar, Usama Pervaiz, and Faraz Ali, all studying at Minnesota State University – Mankato, met with Mankato’s Mayor, Najwa Massad, where they discussed local governance, women in politics, and cultural diversity in the U.S. Mayor Massad shared her story as a Lebanese-American who first came to the U.S. as a child. She also gave the participants a tour of the office and introduced them to her staff. Usama spoke about his experience, saying “Mayor Massad’s office wasn’t just an office. It was a like a family working together to make Mankato the safe, loving, and peaceful place that it is.” 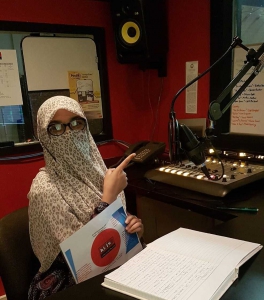 Another UGRAD grantee, Shakira Bint E Shakir, studying at University of the Incarnate Word in San Antonio, Texas, is embodying the true spirit of being a cultural ambassador by hosting a weekly radio show on her university’s radio network, KUIW. The show is an introduction to Pakistan and its culture, exploring linkages between other cultures and communities. On the show Shakira also answers questions from listeners about Pakistan. When Shakira was asked why she decided to create her own radio program, she said, “A key component of Global UGRAD Pakistan is to build cultural bridges and demystify the myths around Pakistan. It was not enough for me to speak to people on campus—I wanted to reach a wider audience.”

The Global UGRAD program also seeks to inculcate the values of community service and philanthropy in its grantees. Living in the U.S., grantees learn the importance of giving back to the community and improving access for the marginalized. Many times, the values learned during a semester-long stay in the U.S. translate into passionate dedication to the cause of serving the underprivileged in Pakistan. During the Martin Luther King Jr. Day of Service at St. Norbert College, students Fatima Qaim Khani and Faryal Muzaffar, completed a day of community service with Feeding America – Eastern Wisconsin. Along with fellow volunteers, Fatima and Faryal sorted canned goods and prepared meals for local families that are experiencing hunger and food insecurity. Commenting on her experience at Feeding America, Fatima said,

“I was surprised to learn there are so many families that do not have regular access to food.  It was quite humbling to hear some of the stories of the families and really made me think more about how I could do something similar to help the underserved people in Pakistan.  I definitely plan to come back to complete more volunteer hours at Feeding America.”

Similarly, Spring 2019 Global UGRAD-Pakistan participants Moueez Ejaz and Muhammad Usama Rizwan studying at Wayne State University, began serving the Detroit community by preparing and serving breakfast to homeless populations at a local shelter run by the Neighborhood Service Organization (NSO). Muhammad narrated his experience at the shelter stating that, “It was both a great and emotional experience to help those in need. We served breakfast to around 150-200 people, and it was primarily sponsored by three individuals. It was amazing to witness this act of charity.” 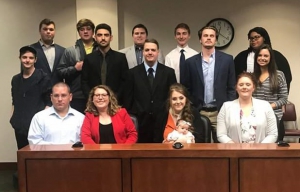 Muhammad Waseem Afzal participates in a mock trial at his university

Global UGRAD grantees are selected in part due to their strong leadership qualities. These leadership qualities are augmented through various courses, extracurricular activities and mentoring opportunities they have access to in the U.S. Muhammad Waseem Afzal, a pre-law student at Murray State University in Murray, Kentucky, was able to build his communication, delegation, and problem-solving skills, by participating in a two-day regional mock trial competition in Louisville, Kentucky, in February. He was one of the nine undergraduate students selected to represent his university. The competition simulated American court proceedings and provided students with professional experience in crafting opening and closing statements and strong examination questions. “Mock trial competitions are not very common in Pakistan” said Muhammad, “and I hope to conduct mock trial competitions for law students at my home university when I return.” 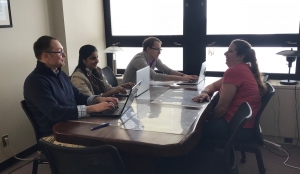 Similarly, Arisha Karim, a student at SUNY – Plattsburgh in Plattsburgh, New York, volunteers six hours per week with the university’s Student Conduct Office (SCO), which educates students about their rights and responsibilities as members of the SUNY – Plattsburgh community. Arisha serves on the Student Conduct Board to review student conduct cases, which entails participating in the initial “review of charges” meetings, and the announcement of the final decision. “Because I am both the first international student and the first blind student working with the Student Conduct Office, I am able to bring a unique perspective to the case decisions,” says Arisha. “I always wanted to be a lawyer, and I’m able to learn the necessary listening and presentation skills that lawyers need to possess.”

The Global UGRAD program teaches students about multiculturalism and multiethnic communities and demonstrates that people across all genders, appearances, cultures, and ethnicities can have a positive influence on the world and deserve to be respected and emulated. UGRAD grantees have described the experience as “life-changing” and one that has helped them in developing lifelong friendships. If you feel you would be a good fit for the Global UGRAD program, please click here for more information.