In October 2019, about 150 Pakistani Fulbright master’s and PhD grantees gathered at Kansas State University to attend the three-day 2019 Fulbright Fall Orientation Seminar. The seminar was an excellent opportunity for Fulbright grantees to build on their skills and acquaint themselves with American culture. The sessions provided many networking opportunities as attendees bonded over personal experiences of culture shock and home sickness.

Grantees take a tour of the Brown v. Board of Education National Historic Site

The seminar was attended by the U.S. Department of State’s Deputy Assistant Secretary for Pakistan Affairs Bureau of South and Central Asian Affairs, Ervin Massinga, Ambassador of Pakistan to the United States, Dr. Asad Majeed Khan, USEFP Executive Director, Ms. Rita Akhtar, USEFP Program Manager, Saleem A. Razaque, and KSU President, Retired U.S. Air Force Gen., Richard B. Myers, along with First Lady, Mary Jo Myers and other representatives from Kansas State University. The event kicked off with opening remarks by Mr. Massinga and Dr. Khan, followed by dinner and Keynote Address for The Performing Arts: The Soul of African American Experience in Jazz” by Professor Wayne Goins from the Department of Music at Kansas State University. 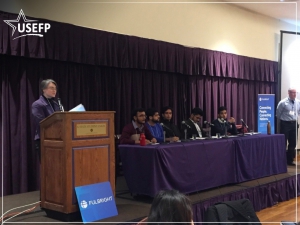 Through various talks, discussions, workshops and tours, the seminar enhanced participants’ understanding of U.S. culture, especially as evidenced in social movements for change. One of the activities discussed the tools and strategies important for academic success; others focused on building leadership skills, raising awareness about public benefits and scams, LGBT activism, etc. The seminar also featured talks such as New Media and New America: Movements, Media and the Algorithms Driving the New Moral Divide, as well as Desegregating American Schools: Race Relations in the U.S. with Particular Reference to Brown vs. Board of Education. 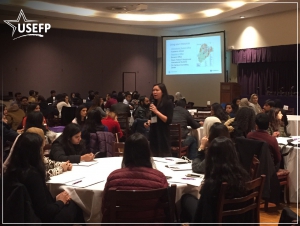 During the seminar the participants were taken on a tour of the Brown vs. Board of Education Historical Museum, the historically preserved school that served as the stage for the landmark court case. The grantees were also taken for a tour of the Capitol or the Capitol Dome, which highlighted John Steuart Curry’s murals in the Capitol depicting Bleeding Kansas and John Brown’s, the abolitionist who led groups of volunteers during the Bleeding Kansas (1854 – 1859) battles between abolitionist and pro slavery groups. Some participants also climbed the 296 steps leading up to the elaborate dome that provides a view of the city of Topeka.

During her thank you note, Fulbright doctoral candidate, Zehra Farooq, said that it is important not to lose sight of our common values, common humanity and common decency. She emphasized the role of programs such as Fulbright, that allow people to transcend the boundaries and connect with one other. Her full address is available here. In her closing address, USEFP Executive Director, Rita Akhtar encouraged the participants to make the most of their stay in the U.S. She thanked the U.S. Department of State for supporting this opportunity to introduce our Fulbrighters to the history of the United States and to the Institute for International Education (IIE) and Kansas State University for organizing the event. 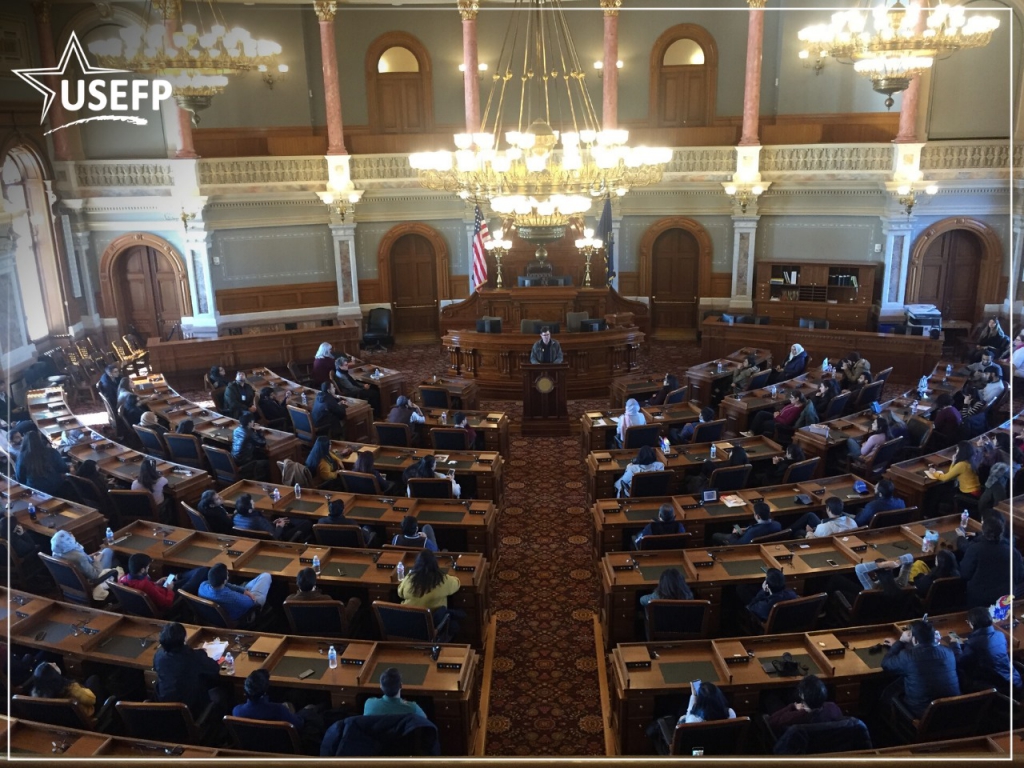 During the last quarter, 12 Pakistani Humphrey fellows, along with USEFP Executive Director, Rita Akhtar, and USEFP senior management attended the 2019 Global Leadership Forum in Washington D.C. The forum, which featured many insightful discussions and skill-building workshops, was one of the events organized by the U.S. Department of State Hubert H. Humphrey Program to mark its 40th anniversary. The highlight of the forum was a reception hosted by the Honorable Assistant Secretary, Marie Royce, in the Benjamin Franklin Diplomatic reception Room at the U.S. Department of State. During the reception, attendees had the opportunity to connect with State Department staff, Fulbright Foreign Scholarship Board Members, and international diplomats.

At the Fall 2019 Re-Entry Workshop hosted by The University of Utah, Global UGRAD-Pakistan participants engaged in a week of leadership development, goal-setting, team-building and preparation for their return home.